Get ready for a film synopsis that will in no way prepare you for how far Chloë Grace Moretz and director Roseanne Liang push it in their TIFF 2020 selection, Shadow in the Cloud. Moretz leads as Maude Garrett, a WWII pilot assigned to board a B-17 Flying Fortress in order to transport an important piece of cargo. The all-male crew is unwelcoming to say the least and forces Garrett to ride in the lower ball turret as they make their way to their destination. Turns out, that vantage point proves vital as the bomber faces off against a number of enemy forces.

Again, keep in mind, that’s just the set-up right there. This one challenges Moretz more than you know right now, but you will get the chance to experience it for yourself next summer because Vertical Entertainment and Redbox Entertainment scooped up the North American distribution rights to Shadow in the Cloud and have plans for a multi-platform release in 2021. But until then, Liang and Moretz took some time to tease what they went through to bring this story to screen with Moretz admitting that this type of challenge aligns quite well with her “sadistic” taste in projects:

“I’m a bit sadistic. I enjoy jumping into projects that I know are gonna be a little rough, that I know are gonna kinda kick my butt. I think that’s kind of a calling card for me. I’m like, ‘Oh, great! Is it gonna be brutal for me to jump into this one? Let’s go for it!’ Honestly, I was excited! I think Roseanne has kind of explained my brain as a bit of a technical brain and I completely agree with that, and I think this kind of movie let me really sink my teeth into that side of balancing the plates of acting on my own pretty much with just voices in my head as well as literally trying to exist within a tiny bowl and make it interesting and be able to progress the story with very minimal things around me.”

Moretz is no stranger to demanding roles, so how exactly does the difficulty of making Shadow in the Cloud compare to some of her past work? Here’s what Moretz said:

“I think this one, in my adult career, probably ranks as one of the hardest ones I’ve done in being that it is really singular. It is really solo. And you really had to balance a lot of different things. Sometimes when you have technical difficulties in a film, [where] you have to be more specific with it, the acting might be maybe a little easier to do, but with this, acting was also very difficult and the technicality was difficult, so really trying to separate but also bring those worlds together was something I haven’t had to do yet in my career, and I think I am a better actor for being a part of this film and being able to get over this task. I mean, I don’t know that either of us will have such a hard project in the future, you know, Roseanne? I don’t know that we’ll have to do something this difficult again for a while!”

While Moretz is front and center during a number of ambitious action set pieces, one can’t over look a seemingly small challenge in comparison – the fact that a ball turret is a mighty uncomfortable place to sit for extended periods of time. Here’s how Moretz described it:

“Everyone was super, super supportive of me and understanding that it was super painful. They were always cool that I would go as long as I could and then would be like, ‘Hey, can I just go to the bathroom, go pee and be able to stretch my legs for a second?’ And definitely towards the end of the film I was having to get my bodywork done at lunch breaks sometimes because my back, it was in such bad shape. Especially once we started the action sequences, I had crazy bruising that was going all the way from here to here from hanging. It was really hard physically. And I have so many injuries from my old movies, that I now have to deal with my injuries from Kick-Ass at 11 and 12. So, I kind of bring some baggage with me!”

This portion of our conversation made it sound a whole lot like Moretz could be following in Tom Cruise’s footsteps, upping the intensity of her on-set challenges with every film. When I mentioned that, Moretz laughed and said, “Kind of! Like, not no. I do love doing stuff like that.” And it seems Liang feels the same way. The two had loads to share about Shadow in the Cloud which is truly unlike anything you’ve ever seen before and required an extremely unique production process to bring the story to screen. You can hear all about it in our full conversation with Moretz and Liang in the video interview at the top of this article! 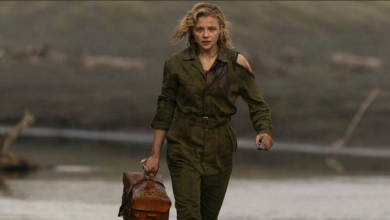 If You’re Not Wearing This Lip Color, You Can’t Sit With Us 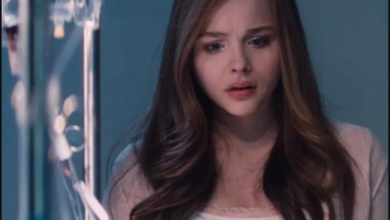 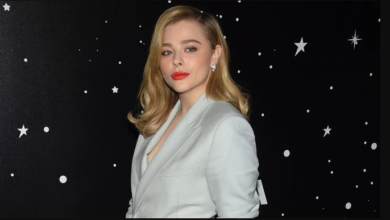