Alexandra Daddario, the famous Hollywood actress, has proven her mantle time and again. She is more than just a pretty face. You may remember her as The Rock’s daughter in San Andreas or as the Rock’s Malibu lifeguard co-worker in the theatrical reboot of Baywatch. She has also starred in the HBO crime series True Detective and won several accolades for her natural acting. She is undisputedly one of the best stars Hollywood has today.

The actress first faced the camera in a TV commercial. She made her acting debut on the long-running soap opera All my Children. It was in the year 2013 Alexandra landed her first breakthrough in Percy Jackson & the Olympian: The Lightning Thief. She even went blonde to play her role to the fullest. Afterward, she did a handful of movies like Can You Keep it a Secret and others.

There is so much to tell about the actress, her acting career, and her personal life.

Know these ten interesting facts about Alexandra Daddario before calling yourself her true fan. We promise you will enjoy reading everything about her.

Her parental grandfather was Emilio Q. Daddario. He was a Democratic member of the United States House of Representatives for the State of Connecticut from 1959 to 1971. Daddario belongs to a family of well-learned people. Choosing acting as her career was quite a surprise for her parents, who believed she would become an attorney. However, they supported their daughter’s career choice.

Although the actress was born in New York City, she is the product of mixed ethnicity. She descends from Czech, Italian, Irish, and English ancestry. Alexandra was raised on the Upper East Side of Manhattan. She attended Brearley School as well as a vocational school for children.

The actress is the eldest child of her parents, Christina Daddario, a lawyer, and Richard Daddario, former head of the NYPD counter-terrorism. Her brother Matthew Daddario is an actor. Her sister’s name is Catharine Daddario.

Alexandra Daddario is a proud owner as well as an advocate of pets. The actress loves animals with all her heart. She is currently helping pets in need of a home. Her partnership with Subaru helps spread awareness for shelter pets.

When Alexandra Daddario turned 32, she gifted herself her own time to charity. When she is not acting, she looks forward to helping society for good. She likes to participate in several noble causes. On her 32nd birthday in 2018, she decided to be the one to give a gift.

She dedicated her time to help the United Nations Foundation’s Nothing but the Net campaign. She also volunteered in the Elizabeth Taylor Aids Foundation and raised funds to provide for children and protect them from disease-carrying mosquitoes in Malawi, Africa. Her humanitarian attempts are praised all over the world.

According to a few rumors, Alexandra was in a long-term relationship with Jason Fuchs. Their relationship started in 2006 and ended in 2009. She later fell in love with her co-star Logan Lerman while shooting for Percy Jackson. The duo started dating in 2009 and even got engaged in 2016. However, the relationship couldn’t last long, and the couple broke up by making an official announcement on their social media.

She also had a secret affair with her co-star Zac Efron but it didn’t work out. In May 2021, she announced that she is currently dating the producer, Andrew Foam. The couple also made their red carpet appearance soon after the announcement. According to the most recent news, the actress’s management team has stated that the couple is engaged. Alexandra made a few public appearances wearing a big diamond ring on her finger. She even did a photo shoot wearing the same.

7. She Dated Zac Efron to Maintain her Self-Esteem

Alexandra and Zac Efron dated for a while after they starred in a movie. The humble-enough actress was later found saying that she thought dating Zac Efron would help her self-esteem. The lady mentioned that it only happened a couple of times when you get to date someone as hot as him. She also joked that she felt like she was getting back at all the boys in the high school that wouldn’t date her.

Not many people know this, but the actress has a deleted cameo from the movie Rampage. After starring once again with her onscreen father as a fellow lifeguard in Baywatch, she almost had her second reunion with The Rock in a follow-up to San Andreas, Rampage. However, the actress never made it into the theatrical cut of the hilarious B-movie adaptation of the popular arcade game. You can check the deleted clip of the actress on YouTube.

As far as her net worth is concerned, we must say the figures are quite impressive. As of 2018, Alexa Daddario’s net worth was $4 million. She made a good amount of money out of her hard work and continues doing so. Her net worth as of 2021 remains unknown. But she is earning a considerable amount of salary from her work.

Daddario has starred in quite a few horror movies, and the Darkness marks her sixth venture into the genre. In an interview, she described that choosing to act in this genre has always been fun for her.

She stated that it allows the actors to let loose. According to her, many horror movies are a metaphor for something deeper. She said she likes the elevated level of an absurd world. Acting in horror movies for her is a lot of fun and a learning experience, and she enjoys doing it to her heart’s content.

Alexandra Daddario has been gifted with beautiful deep blue eyes. Many people take her natural eyes to be contact lenses. She was asked in an interview if she wears lenses or if it is the natural color of her eyes. The actress stated that blue is the real color of her eyes, and she doesn’t wear lenses.

We hope you enjoyed reading these interesting facts about Alexandra Daddario. Keep in touch for more. 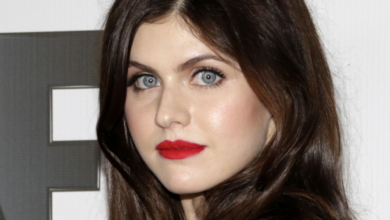 Alexandra Daddario Is Engaged to Andrew Form 6 Months After Going Public With Their Romance: ‘Couldn’t Be Luckier’ 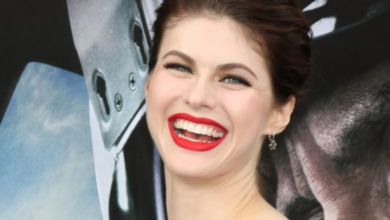 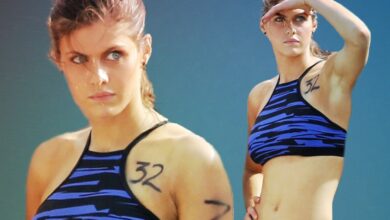