In 1981, I nervously went up to the ticket window to purchase a ticket hoping I would be allowed in to the R-rated An Eye For An Eye. I was and had my life changed forever. Because of what I witnessed Chuck Norris do on screen, I set off on a lifetime journey of martial arts. Chuck Norris made me into the man I am today. NO JOKE! I believe that one of the greatest tragedies to befall movies was when Chuck Norris signed with Cannon Films and true martial arts died in cinema.

But for those of us old enough to remember seeing a pre-Cannon Chuck Norris movie in the theater, it was the equivalent of seeing Michael Jordan play basketball before he retired and went off to play baseball. So without further delay, here are the 11 greatest Chuck Norris and therefore Action Movies in history! Why 11? Because Chuck Norris can’t be contained in a Top Ten List!

1984 America was in a very strange place. We were not the unstoppable juggernaut we are today. Our perceived defeat in Vietnam and the failed Iranian hostage rescue were fresh in our minds. So Chuck Norris decided to rewrite some history and restore pride in America! This was a very personal film for him because he lost his brother in the war. In this, America is about to normalize relations with Vietnam.

The problem is there are many soldiers still considered missing in action and unaccounted for. This leads Chuck Norris to launch a one man invasion of Vietnam, rescue the POWs, steal a helicopter and set in down outside the capital proving that there are still POWs out there that are being sacrificed for political expediency! A rip roaring, patriotic good time at the movies The Cannon Way.

The first MIA movie was actually the second one filmed by Cannon. Missing in Action 2 was a low budget exploitation affair filmed in the jungles of Thailand. But someone at Cannon had the good judgement to realized if they released 2 first, it would kill the box office of the much better MIA. So they held off on it and Chuck’s transition from martial arts movies to bigger budget action fare had begun. Cannon repeated this formula of rewriting history with The Delta Force. These decisions were some of the better ones Cannon ever made.

Chuck Norris did this movie when he was the middleweight sport karate champion of the world. For those of you who don’t know, Bruce Lee didn’t believe in kicking above the waist until Chuck Norris showed him the high kicks in his arsenal of the Korean martial art of Tang Soo Do.

So it was a no brainer when Lee wanted to film a fight scene between two modern day gladiators in the Roman Colosseum, he would choose Chuck Norris as his opponent. We were treated to a battle of a hard style of martial arts to Lee’s flowing Chinese style and his personal martial art of Jeet Kune Do. An all time classic in movie fights.

Good Guys sees Chuck Norris as the former leader of an elite military unit whose retired members are now being assassinated stateside for political expediency. The message of the movie was a little heavy and it could have used a better ending, but in the meantime we see Chuck Norris do a flying kick trough the windshield of a moving car and boots a guy off a motorcycle over a cliff. Chuck Norris was really forced to stretch on his acting and never got proper credit for what he accomplished here in one of his first staring roles.

The only Cannon Film with Chuck Norris. I loved. It was a return to the gritty stories of the past where Chuck Norris plays an undercover cop betrayed by his partner, shot in the head and left for dead. Who emerges from the coma is not the same man who went in as Chuck Norris uses all manner of violence to storm his way up the criminal hierarchy. Rocking a mullet, earring and trench coat, he sets two criminal enterprises against each other as he extracts his revenge. A little short on martial arts but a great character prone to violence to meet his ends, but with a code of honor.

This was the definitive Chuck Norris contribution to the truck driver genre when his brother is imprisoned in a crooked town. Chuck Norris comes looking for him and all hell follows with, as he spins and roundhouse kicks his way trough the town before literally driving right trough it. Vintage Chuck Norris in his prime and serious fun for those of us not at the end of his kicks. The budget was so low, the final scene has Chuck Norris fight his brother in law, who was also one of his students. But it was a beautifully filmed fight scene.

Perhaps the most action packed Chuck Norris movie ever with wall to wall fights. It sees him as the head of security for a casino that the Triaids are attempting to take over in Hong Kong.

When they murder his girlfriend, Chuck Norris dons his 82nd Airborne Army uniform and goes ballistic. Among the highlights of this movie sees a fight shot in front of a flashing neon billboard, another against an opponent wielding a staff and a finale where he takes on a hulking henchmen in one of the most brutal fights in an action movie.

You will know why Chuck Norris has facts after seeing this movie. Originally a script written for Eastwood but retooled for Chuck Norris.

A Force of One sees Chuck Norris as a kickboxing champion in training to defend his title. When somebody starts murdering under cover police officers using martial arts, the cops turn to Chuck Norris for help. It’s a gritty 70s movie that shows a seedy underbelly of L A. In the films climax, Chuck Norris gets into the ring only to realize his opponent is the killer. The highlight of the movie sees Chuck Norris karate chop a crate of cocaine that’s thrown at him in half before going on to snap a neck and restore justice.

Chuck Norris plays an undercover narcotics detective whose partner is killed in an undercover buy. When he throws the offender out a window, he is forced to resign from the San Francisco PD and continue the investigation on his own.

In his corner is a female investigative reporter and his martial arts master played by Mako. There are some awesome action sequences that look like they belong in a much bigger movie and you will be dazzled as to what Chuck was capable of.

The end sees his square off against former 400 lb Japanese professional wrestler Toru Tanaka. This movie changed my life and it will change yours also!

This movie is the Chuck Norris Enter The Dragon – in that it’s his magnum martial arts opus. Chuck Norris plays a occidental raised by a ninja father and his son before he leaves the life behind to go on to be a martial arts champion.

When a mysterious woman shows up and tries to hire him to investigate a mercenary camp, Chuck Norris passes but his student eager for adventure falls into her orbit and gets himself captured. This leads Chuck Norris to invade the ninja compound that’s shaped like an octagon and confront his long lost step brother.

Chuck Norris in his prime spinning crescent kicks his way trough all the ninjas to a final samurai sword vs Kama/sickles confrontation with his brother. To see Chuck Norris in all his martial arts purity, I would start here.

This movie should have been the Chuck Norris transition from chop sockey star to mainstream action hero, but alas he signed with Cannon. Chuck Norris plays Sergeant Eddie Cusack caught in the middle of a gang war between the Italians and Colombians for the drug trade in Chicago. A little light on the fight senses but packed with plenty of action across some great Chicago locations from the early 80s. If I remember correctly, this was a script written for Steve McQueen before his death. A bit a trivia, McQueen was a student of Chuck’s and actually talked him into going into acting. McQueen’s Advice: Just Play Yourself, Chuck.

This is the quintessential Chuck Norris movie. He plays Texas Ranger JJ McQuade taking on a arms dealer played by Kung Fu’s David Carradine. Carradine made some absurd demand that he would not be shown losing a fight to Chuck Norris, so his Tai Chi was shown losing to Chuck Norris. It has the best resurrection scene since Christ as McQuade drives his turbo charged Ford Bronco out of a grave he was buried in. This movie and character were so good, they cleaned him up, changed his name and put him on TV for nine years in Walker, Texas Ranger.

Last year, I fulfilled my lifelong quest to meet Chuck Norris at a comic con in Texas. He looks great and greeted each and every fan warmly. His hands were soft and warm, like he just got trough killing lots of bad guys. I asked his wife Gina if they had any movies in the works.

Sadly, she said no. I asked her about a story on the website City on Fire that Chuck was involved in a project by Isaac Florentine of the Scott Adkins movies was to direct called Blood Brothers about poachers in Botswana. She said they had no involvement in that and Chuck’s name was only floated to secure tax breaks. I told her I remembered a project Chuck was involved with in the early 80s called Devil’s Turf where he was to play a priest in a low income neighborhood based on a script from Pat Johnson I told her it would be the perfect project for Chuck at this stage of his career.

She smiled at me and it was then time for the line to move on. But how many people get to say they actually met their hero Chuck Norris! I can! And I have lived to tell the tale! 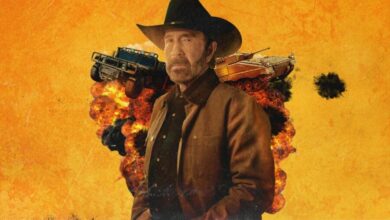 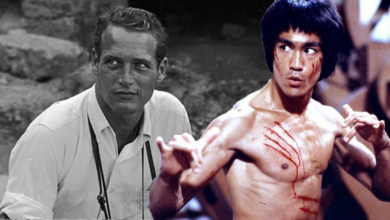 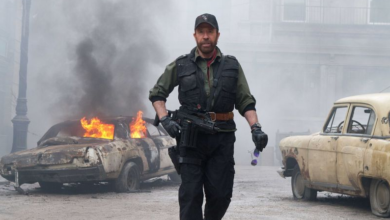