After weeks of speculation, fans are growing increasingly convinced that Kylie and Travis have already welcomed their second child. But did Kylie Jenner have her baby yet?

Fans first learned about Kylie’s pregnancy in August 2021, when a source told Page Six that the entire Kardashian-Jenner family—including Kylie’s mom, Kris, and her sisters Kendall Jenner, Kourtney, Kim and Khloé Kardashian—were all “thrilled” by the news. The following month, Kylie and Travis, who have been dating on and off since April 2017, confirmed the reports that they were expecting a second child together with a 90-second Instagram video announcing the pregnancy. The couple currently share a daughter named Stormi, whom they welcomed in February 2018.

Fast forward to December 2021, rumors began to swirl that Kylie had already given birth to her second baby. Social media users began speculating that Kylie secretly welcomed her child when her older sister Kourtney Kardashian’s fiancé, Travis Barker, posted a photo of them watching the 2000 movie, How the Grinch Stole Christmas. In the photo, a baby bottle could be seen filled with milk on top of a coffee table.

“Hi @travisbarker you can’t just post a pic of a baby bottle and be like ‘Imma just leave this here,’” fan account @kravis4ever captioned a repost of the photo. “Kylie HAD TO HAVE HAD HER BABY,” a social media user commented. Another claimed, “Kylie used those exact bottles when Stormie was little.” Other fans also noted that the bottle looked similar to the Comotomo baby bottle brand, a favorite of the Kardashian-Jenner family.

Since then, the rumors about Kylie’s baby have persisted. So, did Kylie Jenner have her baby already? Keep on reading ahead for everything we know so far.

Did Kylie Jenner have her baby?

After sparking weeks of speculation, fans are still wondering if Kylie Jenner had her baby yet—and it seems the clues have only continued to grow. In January 2021, fans spotted what appeared to be yet another hint that the Kylie Skin mogul secretly gave birth to her second baby after her assistant Maguire Amundsen shared a telling post on social media.

In a post shared to her Instagram Story on January 11, 2021, Maguire wrote, “Waiting in line at Starbucks at the airport is like Russian roulette… will I be able to order before my flight starts boarding? Will my drink be ready? Will I have to abandon ship and leave the drink from some lucky winner??? Stay tuned.” Later that day, the assistant shared a photo to her Instagram feed hinting at her travels: “bag lady travels,” she captioned a photo of herself with luggage in tow.

After Maguire’s posts, Keeping Up With the Kardashians fans took to social media with a new theory: Many believed that the assistant may have been on her way to Los Angeles to help Kylie after the secret arrival of her new baby! While Kylie has yet to address these rumors directly, it does seem awfully coincidental that Maguire is headed to Los Angeles around the time of Kylie’s due date after spending some time in Dallas, Texas.

Even if the rumors are true, it’s likely Kylie will take her time with announcing her pregnancy. As fans remember, Kylie kept her pregnancy a secret when she was expecting her first child, Stormi Webster, in 2018. During the Keeping Up With the Kardashians series finale in June 2021, Kylie explained why she didn’t confirm her pregnancy until after she had given birth.

“I shared so much of my life,” Kylie said. “I was also really young when I got pregnant, and it was just a lot for me personally. I didn’t know how I would bring that to the public too and have everyone’s opinion. I think it was just something that I needed to go through by myself.”

Her sister, Kendall, added, “This is obviously a theory—I’ve never been pregnant, and I’m sure there’s studies on this—but I think that the more at peace you are when you are pregnant, that goes into your child. I think it’s a reflection of even her daughter today, and how amazing and beautiful she is, is just because Kylie was so at peace in her pregnancy. I really do think it was the best decision.”

Kim also suggested that the decision was made to keep Kylie and her baby safe. “There were times when we would be driving and pregnant, and paparazzi would almost crash into our cars because they just wanted a picture,” Kim said. “Kylie really wanted to, I think, protect her safety, the baby, and have that just be a private moment.”

Keeping Up With the Kardashians is available to stream on Peacock. Here’s how to watch it for free.

Our mission at STYLECASTER is to bring style to the people, and we only feature products we think you’ll love as much as we do. Please note that if you purchase something by clicking on a link within this story, we may receive a small commission of the sale. 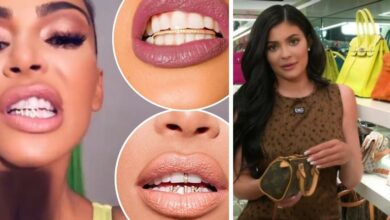 10 Ridiculously Expensive Things The Kardashians Own 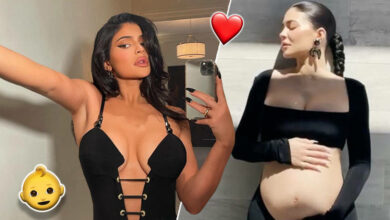 What Is Kylie Jenner’s Due Date and Is Baby Number 2 a Boy or a Girl?