Seinfeld’s characters are fairly notable film buffs, though nearly all of the movies they watch are fake. While Seinfeld’s main characters do go to see plenty of real-life films that are integral to the episodes’ plots like The English Patient and Schindler’s List, more often than not, the gang sees fictional titles. Seinfeld’s fake movies became one of the show’s best running gags, with many getting fake theatrical posters, casts, and plotlines.

Considering Jerry works in the entertainment industry, Seinfeld notably keeps its characters well-versed in pop culture, most commonly demonstrated through their movie watching. Most of the fake movies that Jerry, George, Elaine, and Kramer watch are only mentioned once or passively, while others reappear throughout the series. Seinfeld’s fictional movies are also rarely shown on-screen, with most of the theater viewing scenes only featuring snippets of their dialogue, which are typically voiced by Curb Your Enthusiasm’s Larry David.

Additionally, many of Seinfeld’s fake movies were poking fun at the popular movies of the time, most commonly with the plethora of rom-coms and action movies in the early and mid-’90s. The ridiculousness of the titles and plots of Seinfeld’s movies have made many wish they could actually be adapted in real life, especially considering several were inspired by true unproduced screenplays by Seinfeld’s writing staff. Here’s a breakdown of all the fake movies the characters watch throughout Seinfeld’s nine seasons.

In Seinfeld’s season 2 episode “The Heart Attack,” Jerry falls asleep while watching a sci-fi B-movie on television. The movie is called Flaming Globes of Sigmund and features a space-related premise in which showrunner Larry David cameos as an Austrian-accented character wearing an aluminum suit and goggles. While the actual movie is only really remembered by Larry David’s screaming on-screen character, it plays a significant role in the episode because it inspired a joke that Jerry wrote; he just can’t read what it says. At the end of the episode, Jerry watches Flaming Globes of Sigmund again on TV while at the hospital, finally allowing him to remember the joke. Jerry then realizes the joke wasn’t funny at all, and Flaming Globes of Sigmund is never watched again by Seinfeld’s characters.

Instead of seeing Prognosis Negative in “The Dog,” Seinfeld’s Elaine and Jerry go to see the fictional Ponce de Leon. Later on in the episode “The Movie,” the gang discusses whether they liked the movie, with Elaine loathing it. The film tells the story of real-life Spanish conquistador Juan Ponce de León as he searches for the fabled Fountain of Youth. George liked Ponce de Leon, specifically a scene in which the conquistadors splash around in the Fountain of Youth only to look in the mirror and realize it had no effect. Similar to Prognosis Negative, Ponce de Leon is based on a real-life script by Larry David that was never produced.

In season 3’s “The Movie,” Checkmate is the film that Seinfeld’s characters all actually wanted to see, but a series of misfortunes led them to separately see Rochelle, Rochelle. The plot of Checkmate seems to be a political thriller from what’s heard in the theater, with two characters voiced by Larry David and Jerry Seinfeld discussing how the king is always in jeopardy – in real life and in the game. By the end of the episode, every character has missed the showing for Checkmate besides Kramer.

Seinfeld season 7’s “The Pool Guy” features a whole slew of fake movies in one of its core plotlines. In the episode, Kramer got a new phone number that’s only one digit off from the number for Moviefone, an information service for movie times, tickets, listings, and general cinema information. Learning to live with the abundance of wrong callers, Kramer decides to look up movies and answer their questions. Along with giving George the time for the recently listed Chunnel, Seinfeld’s Cosmo Kramer mentions plenty more fake movies. One is Agent Zero, which is based on a screenplay that Seinfeld’s writer David Mendel intended to scribe. While not much information is given besides the titles, there’s also Brown-Eyed Girl, Cupid’s Rival, and Chow Fun.

Kramer additionally gives information on the plot, stars, and tagline of Mountain High, an R-rated action film supposedly starring Susan Sarandon and Kevin Bacon which is promoted with the line, “There’s no higher place than Mountain High.” Although first mentioned in season 7’s episode “The Engagement,” Kramer also refers Firestorm to callers, an action movie that Jerry goes to see. Firestorm apparently stars Harrison Ford as he jumps out of planes, has shootouts with the bad guys, lands a helicopter on top of a car, and performs a daring underwater escape. As discussed in Seinfeld season 7’s episode “The Rye,” Susan’s father calls Firestorm “one hell of a film” before Frank Costanza aggressively yells at him for spoiling the movie.

In one of Seinfeld’s most iconic episodes featuring George’s girlfriend Susan Ross, Jerry and Elaine strike up a friendship with her and go see Chunnel in the season 7 episode “The Pool Guy.” Jerry Seinfeld and Elaine have an extremely noisy discussion about Chunnel’s plot in the theater, leading Susan to shush them and effectively ruin their friendship with her. Some of Chunnel’s plot can be surmised by what is heard in the theater, which features a character voiced by Larry David saying, “Everybody get out of the Chunnel.” Seinfeld writer David Mandel revealed that Chunnel’s plot follows the U.S. President’s daughter being stuck in a channel tunnel between England and France. Like Rochelle, Rochelle, Chunnel also got its own fictional tagline: “Chunnel: 32 Miles of Hell.” While most of Chunnel’s scenes that Seinfeld’s characters watch aren’t shown on-screen, the visible clips come from Michael Douglas’s 1995 movie The American President.

In season 7’s episode “The Engagement,” George desperately wants to see Firestorm but is instead pulled into seeing The Muted Heart with Susan. According to Jerry, The Muted Heart stars Sally Field and Glenn Close. It’s not revealed what the plot of the fake Seinfeld movie was, but it didn’t seem that George cared for it.

Seinfeld’s fake movie Sack Lunch might take the cake for its obscurity. In the season 8 episode “The English Patient,” when everyone is obsessing over the real-life The English Patient movie starring Ralph Fiennes, Elaine doesn’t get it. Instead, she wishes she could go see Seinfeld’s fictional Sack Lunch, which apparently stars actor Dabney Coleman. Elaine goes to see it by herself and truly enjoys it as she’s also excited when it turns out to be the movie playing on her airplane flight. Seinfeld’s episode also features a theatrical poster for Sack Lunch, which shows a family in a lunch sack, leading Elaine to wonder whether the family was shrunken down or are sitting in a giant bag.

After simply wanting to go see a new movie with Kramer, Jerry becomes wrapped up in a movie bootlegging scheme with Kramer’s friend Brody. The first film that Jerry reluctantly records is Death Blow, an action movie whose tagline says, “When someone tries to blow you up, not because of who you are, but because of different reasons altogether.” From little snippets revealed by Kramer, Death Blow also appears to be the name of a character, while a Hawaiian character also receives “a death blow.” Death Blow’s mentioned scenes also include a meetup between the protagonist and antagonist, as well as the main character falling out of a plane as he continues to catch fire.

Upon realizing how well-recorded Jerry Seinfeld’s season 8 movie was, Brody recruits him to bootleg an “arty movie” titled Cry, Cry Again. Jerry refuses to record this movie, so Kramer takes over, with Seinfeld’s episode showing a scene that takes place near the Eiffel Tower – though, the footage is actually pulled from the real-life movie Forget Paris. As Jerry recalls, one scene in Cry, Cry Again has the main character “buy back a loaf of his soul,” in a metaphor with a loaf of bread. By the end of the episode, Elaine has taped over Kramer’s bootleg, wanting to see how bad her dancing really is (it’s bad).

The Pain And The Yearning

In the Seinfeld season 8 episode “The Comeback,” Julia Louis-Dreyfus’ Elaine Benes goes to a video store and looks through Vincent’s Picks, a staff member’s movie choices who she typically trusts. This week’s movie is the fictional The Pain and the Yearning, a 192-minute film that simply follows an old woman’s pain and yearning. Instead, Michael Richards’ Kramer advises her to go with another staff member’s pick: The real-life 1993 comedy Weekend at Bernie’s II.

The Other Side Of Darkness

While Elaine is contemplating renting The Pain and Yearning, Kramer is raving about the direct-to-video movie he rented called The Other Side of Darkness. The film’s plot follows a woman who goes into a coma and her husband, played by The Dark Knight‘s Eric Roberts. The Other Side of Darkness deeply worries Kramer about falling into a coma, leading him to consult with a lawyer about drawing up a will and the legal actions he would like to take under which circumstances of a coma. Kramer reveals that the longer-than-2-hour movie ends with the comatose wife waking up, which leads him to revoke his living will.

While only experienced by George, Blimp: The Hindenberg Story is actually featured in Seinfeld’s banned season 9 episode “The Puerto Rican Day.” While the gang is sitting in a traffic jam, George mentions a zinger he made while watching the new movie that he was really proud of. When the Hindenburg blimp explodes in the movie’s climactic scene, George yells, “That’s gotta hurt!” When George sees that Blimp is playing in a nearby theater, he leaves the car so that he can make the comment to the audience again. When George goes to make the joke, his comment is ignored in favor of a man in the theater using a laser pointer. 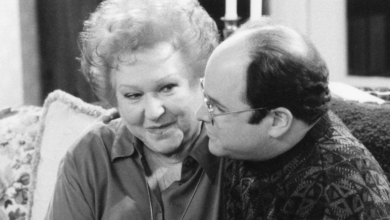 How Much Did Estelle Harris Make During Her Time On ‘Seinfeld’? 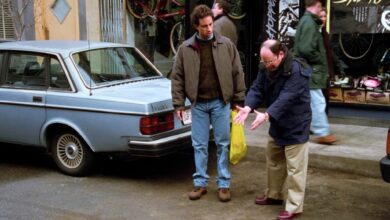 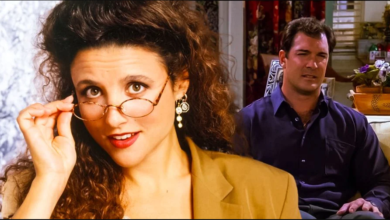 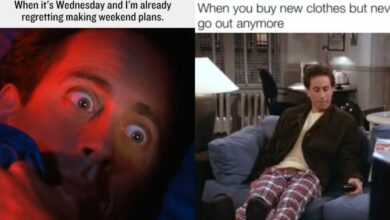