Kendall Jenner set herself up to have an eventful first weekend in 2022.

The reality television star, 26, shared a set of photos with her more than 209 million Instagram followers that showed her spending the weekend drinking a bottle of 818 tequila out on a farm.

In the photo where she held the bottle of tequila, she wore a sweater of multi-colored patches and a tiara that read, ‘Happy New Year.’

The two-time NBA All Star wore a black turtleneck sweater under a black coat. He donned a thick silver necklace and held a glass of red wine in his left hand.

An insider told Us Weekly that the two were seeing each other back in August of last year though they spent quite a bit of time together before that as well.

Jenner seemed to enjoy the leisure time of the vacation with one photo showing the star walking through a large field in a puffy black jacket and bright red pants.

The social media personality posed for a picture in front of an idyllic red barn and pristine white fence.

In that photo, she wore a checkered white and black sweater, gray sweatpants and dark black sunglasses to protect her eyes.

Kylie’s older sister captioned the series of photos, ‘my weekend.’

Kendall’s post comes just a couple days after the teaser trailer for the upcoming reality show The Kardashians.

The teaser shows Kim, Khloe, Kourtney Kardashian, Kris, Kylie and Kendall Jenner trotting around in high heels and their most stylish ensembles.

Kanye’s ex-wife opened up about the television show previously in an interview with WSJ. Magazine, saying that the show will show a ‘different side’ of the Kardashian family.

‘I think it will be a different side,’ the middle Kardashian sister said. ‘But I wouldn’t say that our silly sides are not going to come out.’ 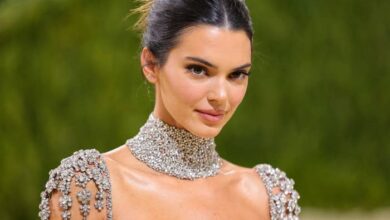 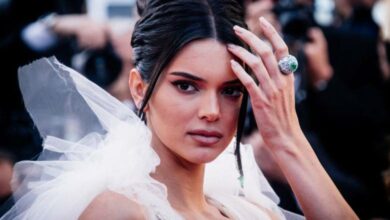 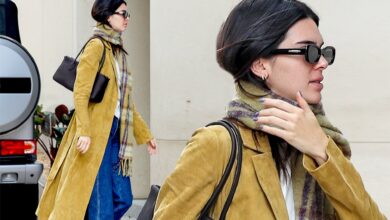