Seinfeld is a masterclass in the absurd, twisting the mundane events of daily life into comedy sketches that remain as funny now as they were decades ago (for the most part). Although the show never really runs out of material for new jokes, there are a few that tend to pop up on multiple occasions.

Running gags are common sitcom fare, but they play an extra role on Seinfeld, showing how its characters resist change despite the negative consequences. And, in the end, that’s the whole point of the show — extracting dark humor from people whose repetitive quirks often spill over into comic hyperbole.

Kramer constantly brings up his friend Bob Sacamano during conversation, mentioning bizarre events that don’t sound credible in the slightest. Depending on the episode, this invisible character works in a condom factory, contracts rabies, has inhumanly massive synapses, peddles Russian hats, and so on.

The funny thing is that none of these anecdotes are ever confirmed because Sacamano doesn’t make a single appearance in the show. Bob is just one instance of Kramer’s hilariously wild stories, but it pretty much proves that the latter can redefine anything he wants to be real — as exemplified by the number of running gags related to his fanciful eccentricities.

9 George Is Unnecessarily Terrified Of Diseases

George is a walking contradiction: he cares little for his health in terms of diet and exercise, but is terrified of contracting diseases that he’s not very likely to have. His hypochondria stretches to “meningitis, scoliosis, lupus”, and he also has a minor breakdown when he suspects he has cancer for no reason.

When George allows Kramer to take him to a “holistic healer” after losing faith in modern medicine, his skin turns a comic shade of purple — “I’m an eggplant! I’m an eggplant!” The humor in this running gag is derived from his baseless terror, which unironically helps shape his character. As such, this particular peculiarity is just one symptom of George’s descent into full-blown neuroticism over the course of the series.

The former owner of the New York Yankees, George Steinbrenner, is parodied in the show; George works under him for a few seasons. He isn’t shown (at least from the front), but is voiced by Seinfeld co-creator Larry David to hilarious perfection. The fictional version is over-the-top in most imaginable ways, like discussing the merits of “alcoholic chicken” and his rapid, borderline-incoherent speech pattern.

Interestingly, the real-life Steinbrenner found his caricature to be amusing, admitting that Seinfeld “did a pretty accurate job”. This gag works on multiple levels, mainly centered around George’s constant state of bewilderment during every conversation he has with his boss, and inevitably concluding with him walking backward out of Steinbrenner’s office.

7 George Lives In A Society

While George might be a hot mess, he’s quick to point out when other people are disrespectful or boorish. When a woman in the Chinese restaurant snatches the payphone away from him, he is understandably furious, ranting about “living in a society” and acting “in a civilized way.”

George repeats the declaration when a man at the airport refuses to tell him the time (while wearing a watch). The comedy comes, of course, from him screaming the words into empty air, after those who annoy him leave the scene. It’s hypocritical of George, given that he regularly makes life troublesome for others, but that’s just what he does: annoy people in the course of satisfying whatever unreasonable desire he has at any given time.

Jerry’s role on Seinfeld is less interactive and more observational. He rarely participates in his friends’ numerous mishaps, and cheerfully dismisses their emotions when he learns about their problems. Jerry’s go-to burn is “that’s a shame”, which he uses indiscriminately and regardless of context.

Kramer also classifies Jerry as an “Even Steven”, claiming that “things have a way of evening out” for him, which implies that Jerry doesn’t need to bother with the fluctuations of circumstance that usually wreck the lives of the other three. In this context, “that’s a shame” definitively demonstrates Jerry’s lack of interest in other people as well as his own situations. The use of this line as a running gag is extended to several characters, including George, Kramer, Newman, and even an employee at Elaine’s parlor (in Korean).

5 Kramer Is Fussy About Fruit

Different people enjoy different things, and Kramer’s craving happens to be for quality fruit (according to his inconsistent standards, obviously). In one instance, he attempts to return a half-eaten peach to Joe’s produce store, resulting in a ban. When Jerry suggests shopping at the supermarket instead, Kramer responds with “The apples are mealy, the oranges are dry. I don’t know what’s going on with the papayas!”

He even sics a dog on Newman because the latter eats the last remaining Mackinaw peach. Kramer’s devotion for all things fruit is exaggerated to absurd proportions, especially in light of the fact that he has no qualms eating stray items of food from Jerry’s refrigerator — another popular running gag on the series.

George loves food so much that he tries to get it involved in his sex life, but that doesn’t take into account his dining etiquette. In several scenes, he is shown gobbling various foods, usually without any concern for those unfortunate enough to be in the area. George has been broken up with because of his sloppy eating, and in one episode, he is filmed slurping up ice cream at the US Open and broadcast on live television.

This level of humiliation certainly makes for an incredible running gag, but it sadly does nothing to improve George’s sense of decorum because the embarrassment he feels is short-lived. He goes right back to his old habits in the next episode; it’s not like audiences want anything else, anyway.

The longest-running gag on Seinfeld, appearing hundreds of times over the nine seasons, is when Kramer bursts through Jerry’s front door with his slide. Although originally not part of the script, Michael Richards “was late for a cue and rushed to enter the apartment”, thereby inventing his signature move.

Kramer’s carefully choreographed moments of physical awkwardness are nothing short of slapstick genius, so it’s not surprising that his entrances are never boring. The running gag is so popular that it is applauded and cheered whenever Kramer slips, skids, or otherwise tumbles into the scene.

Elaine is a peppy person in general, but she goes a bit too far when her excitement reaches its peak. Her common reaction to receiving surprising news is shouting “get out!” and pushing the other person away with all the force she can muster. In two separate cases, she pushes Jerry and Kramer so hard that they fly into another room.

This gag works spectacularly as an extension of Elaine’s personality, especially since the magnitude of her shoves are considerably amplified over time — in sync with the trend towards aggression exhibited by her character in later episodes. That said, iconic doesn’t even begin to describe Elaine’s enthusiastic frenzy.

Jerry and his neighbor-nemesis, Newman, produce some truly golden moments on Seinfeld, but nothing is more memorable than two simple words uttered with blunt condescension — “Hello… Newman!”

This short line fully characterizes the whimsical (and uneasy) relationship between the two characters; its comical nature is greatly enhanced whenever it is performed because Jerry delivers it with different expressions each time. Newman often responds in kind, turning their hilarious back-and-forth into a series-long gag that never fails to get a laugh. 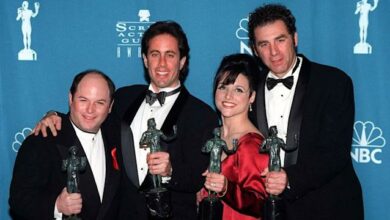 This Is How Much Reruns Of ‘Seinfeld’ Are Still Earning 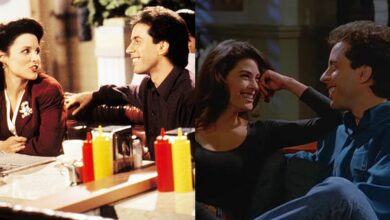 Seinfeld: 10 Things That Would Be Different For Jerry Today